Canyon Drive is a collector style street that was constructed during the Spring and Summer of 2009.  The street was a connection between two existing subdivisions, Forest View and Arbor Woods.  The street was within the limits of the Arbor Woods subdivision, which was originally constructed in the early 2000’s.  The design and construction of the project had to incorporate the fact that an elementary school was under construction on the East side of the road and utilities had been installed through the worksite during development of the adjacent subdivisions. 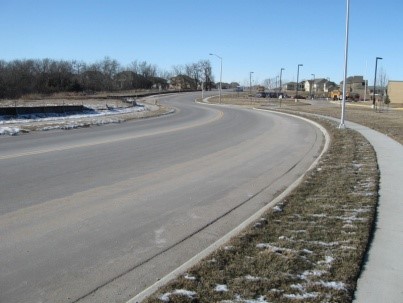 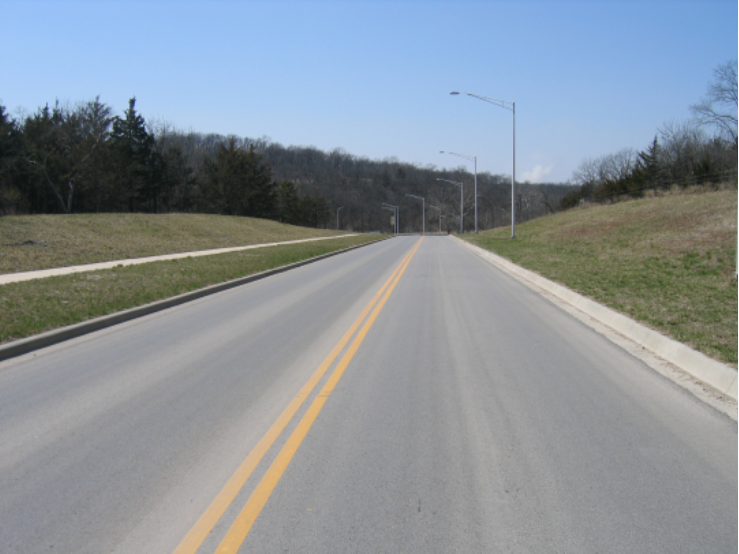 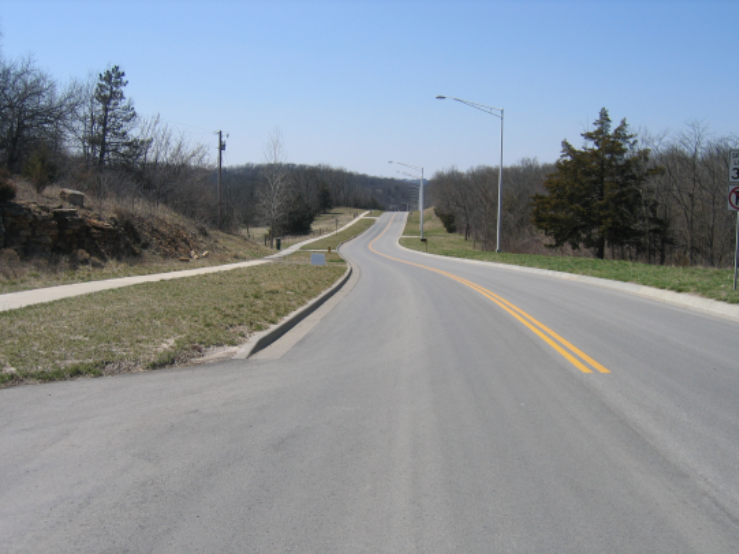 Background:  The City of Olathe created a benefit district to construct one-half of a major arterial road from K-7 Highway to Clare Road.  The total length of the 119th Street improvement was approximately 3,600 feet.  Prior to the improvement, 119th Street was a gravel roadway with several residential driveways and field entrances, relatively steep longitudinal grades, steep embankment slopes, shallow limestone ledges and an existing bridge at Little Cedar Creek.  A pedestrian bridge adjacent to the existing vehicular bridge over Little Cedar Creek was required.

Project Management:  119th Street was by Payne & Brockway.  P&B was responsible for all of the daily activities on the project, schedule, budget and correspondence with the project stakeholders.  The biggest challenge P&B encountered on the project was the last minute acquisition of right-of-way from one of the adjacent property owners.  Construction on the project began without the executed right-of-way documents from one property owner adjacent to the property.  The project was phased to provide time to acquire the land, but the land owner was less cooperative than expected.  The contractor completed the first phase and needed to move to the second phase in order to meet the late November deadline for substantial completion.  P&B organized a meeting with the five (5) entities that comprised the trust owning the land and one of the developers in the benefit district to acquire more funds for the land owners in exchange for their signatures on the right-of-way documents.  This avoided a lengthy condemnation process and the project was completed on schedule.

In early 2004, Payne & Brockway was preparing a plan for the development of a 400 acre tract of land that is located on the northeast corner of the intersection of 127th Street and Clare Road.  In accordance with City of Olathe standards and ordinances, the developer of the property was required to provide proof that the 725 lots in the proposed development would be adequately served by public services.

127th Street and S. Clare Road, along with two other sections of arterial roadways that served the development, did not meet city standards.  In accordance with city policy arterial roadways are constructed to collector standards by adjacent property owners and are typically financed through Benefit Districts.

The petitions were prepared by Payne & Brockway in accordance with city requirements and approved by the Olathe City Council.  The requirement was that the petitions be approved, but the roads did not have to be constructed until the development had progressed to a point where the traffic loads would mandate the need for the road.

During the winter of 2008 it became apparent, due to development activity in the area, the roads needed to be constructed.  The cost of construction nearly doubled between 2004 and 2008, mainly due to increases in the price of oil and it was found that the project could not be constructed under the budget that had been set up in the petitions.  The original petitioners were unwilling to approve a new petition that would increase the proposed assessments on the adjoining properties.

Payne & Brockway worked with O’Donnell & Sons Construction Company to develop a plan that would allow O’Donnell & Sons to enter into a design build contract with the City of Olathe to construct the roads and save the City $1,000,000.00 in the process.

The details of the plan were worked out during the winter of 08’-09’.  One key element of the cost savings was the fact that O’Donnell & Sons and Payne & Brockway could prepare the plans and construct the project during the construction season of 2009.  The plans for the 6,440 lineal feet of roadway needed to be prepared and permitted during the Spring of 2009 for the project to be constructed as planned within the available budget.  One key element of the design process was timely reviews by the City of Olathe and the cities willingness to review individual elements of the work as plans were prepared.

The projects special requirements included permits from the Corps of Engineers, Division or Water Resources and an encroachment agreement with Southern Star Central Gas Company.  These requirements were all addressed during the spring of 2009 to allow construction to proceed during the summer and fall.

Land acquisition for the project was negotiated by Payne & Brockway with the Olathe School District, Johnson County Parks Department and several land owners.

The project was completed on time and within the budget for the project. 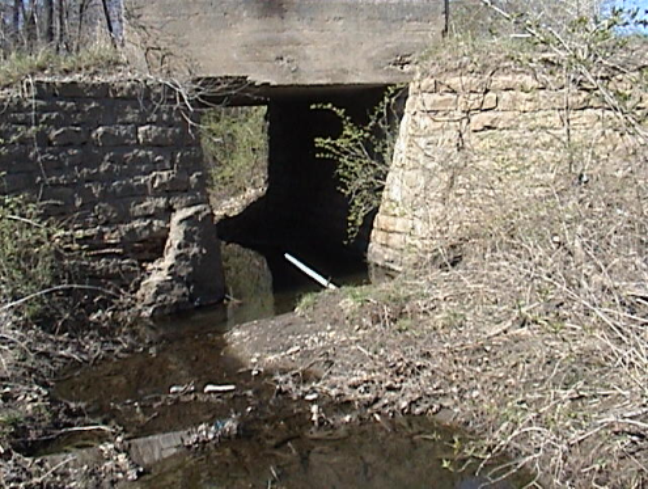 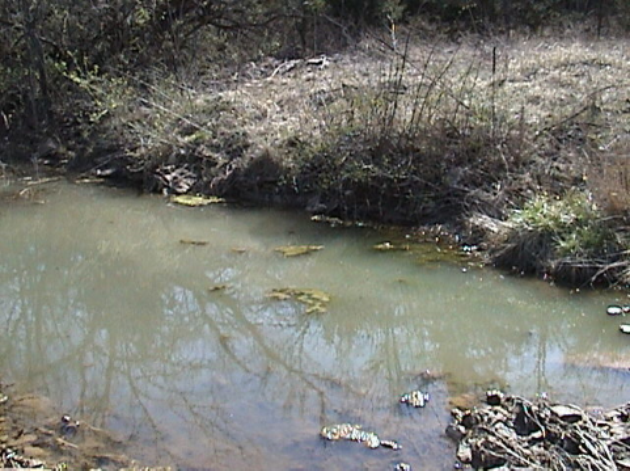 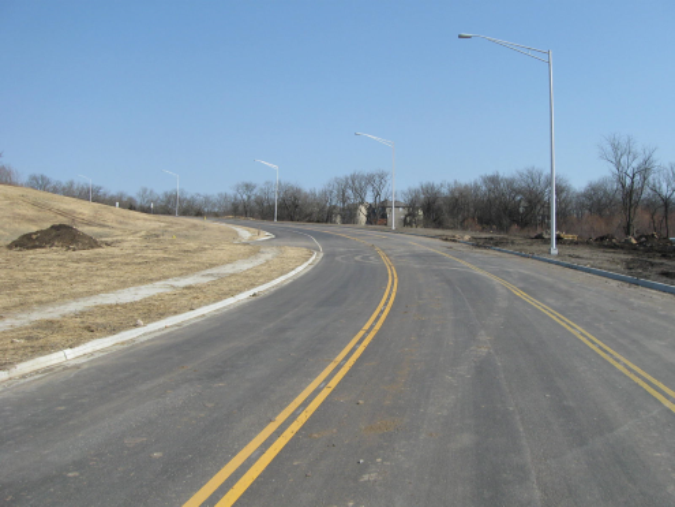 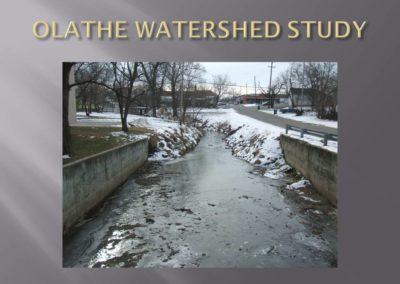 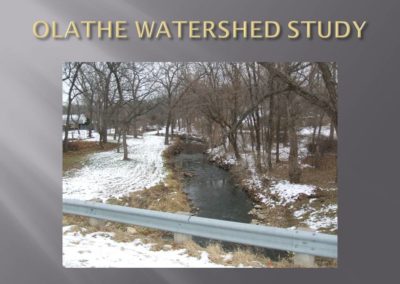 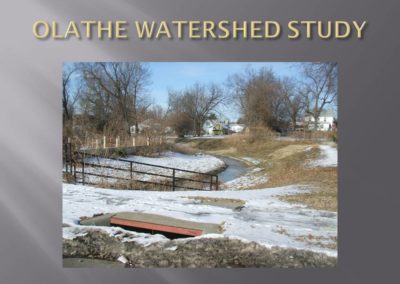 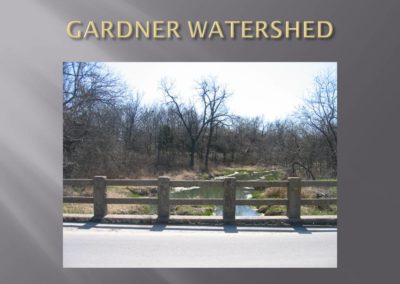 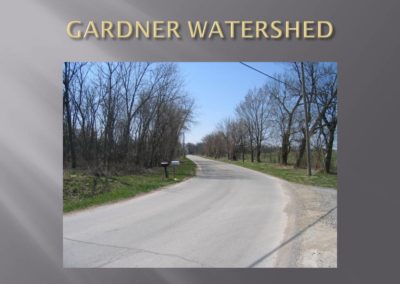 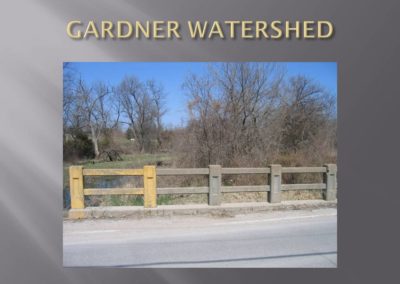 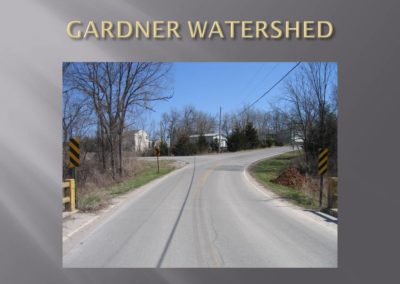 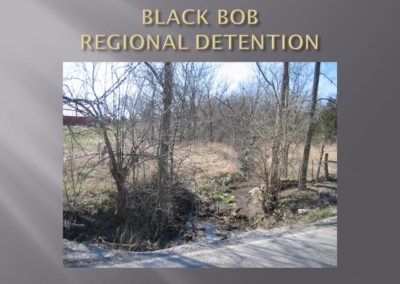 Payne & Brockway, teamed with Camp Dresser and McKee, were selected to complete a creek improvement study to investigate solutions for homes and businesses located within the newly defined floodplain limits.  This project included preliminary engineering studies for approximately 15 locations.  Payne & Brockway was responsible for all surveying and a portion of the hydraulic modeling of the proposed flooding solutions.

Payne & Brockway in association with Camp Dresser and McKee was selected to complete a watershed master plan for the City of Gardner, Kansas.  Payne & Brockway was the lead engineering firm on this project and was responsible for all project management.  The master plan included extending the Johnson County watershed  results to approximately 40 acres of tributary drainage, updating floodplains to reflect modified topography, modeling recommended improvements for future capital improvement projects, and recommending enhancements to current floodplain and stream health policies and ordinances.